Holding The Other Party in Contempt 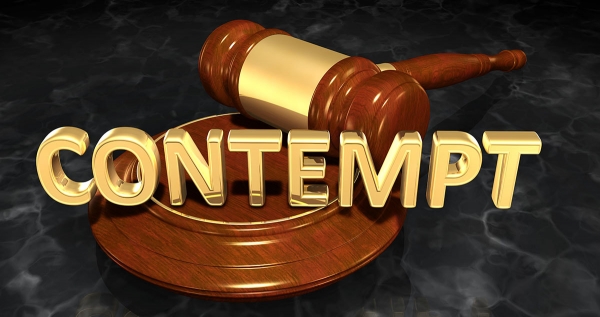 Sometimes relevant to personal injury cases, but normally in the context of either family or probate cases, understanding the process of holding an adversarial party in contempt is critical.  When parties come to an agreement (which is then approved by the Court as an order) or when cases are adjudicated, they will result in an Order from the Court.  That Order should be followed by the parties, but in some cases, it is not. It is up to the "wronged" party to file against the offending party in those circumstances.  The procedure involved is the purpose of this article.
Contempt of Court (outside of contemptible actions occurring in Court) occurs when a party has been proven to have disobeyed the Court. The usual context is with a party violating a Court Order.  This could be a temporary court order while waiting for a final hearing, violation of an order for something like child support, or a violation of a Final Order.  When a party has violated the Court Order, the other party must file a "Rule to Show Cause" with the Court in order to have a hearing for the Court to hold the violating party in Contempt.  The Rule to Show Cause allows parties due process to show there has been no violation, so it's up to the party bringing the Rule to show the violation of the Order.
The filing of a Rule to Show cause includes a Petition (usually done by an attorney), in which the contempt is alleged.  This is done by including the Order being violated, the provision which was violated, and the allegation of the violation.  The petition is "validated" by the party (if Petition is done by an attorney) and usually includes the evidence of the violation.  This may include pictures, texts, affidavits, etc.  The Court reviews the Petition before granting a hearing, then notice (including the Petition and evidence) is given to the offending party.  The offending party is going to be given an opportunity to rebut the allegation at the hearing.
The party bringing the Rule will have requested relief in the Order.  In other words, what they want the Court to order against the offending party.  Normally, this will include the attorney fees to bring the contempt action.  It will also remedy the violation. For example, if a party has not paid the proper child support, they will be ordered to do so with penalty/interest.  The Court can go so far as to Order a violating party to be jailed for a period of time.  For example, in the event of non-payment of child support, a party can be jailed until clearing the arrears.
It's important for clients to initiate a Rule to Show Cause at the first violation, or the other party will act with impunity. Inform the attorney, or bring the action Pro Se without an attorney.  In the end, it's about showing respect to the Court and justice.
Rate this item
(1 Vote)
Tweet
Read 1084 times
Published in: Law Related Articles