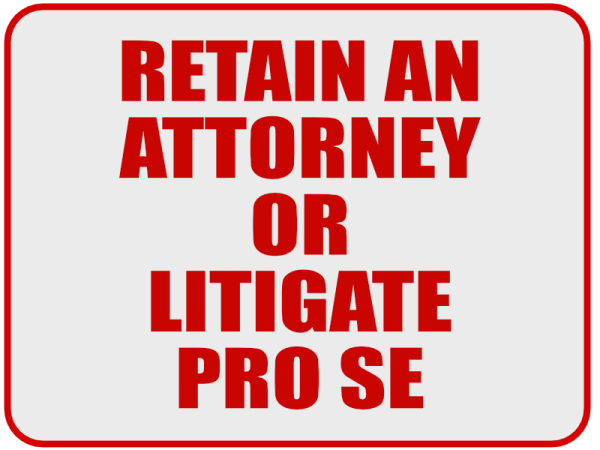 When a contract dispute, personal injury matter, or anything else that might require legal representation, it’s important to think before seeking counsel. Representing yourself is referred to as “Pro Se” representation under legal (Latin) terminology and is an option to consider. In almost any matter, your are allowed to represent yourself. The license requirement for a Lawyer to represent another in legal matters, so a lawyer is almost never required. There are a number of things to consider about the situation before seeking to retain counsel, and those considerations may lead to Pro Se representation.

First thing to understand is that most lawyers will recommend retaining a lawyer regardless of the type of case.  Part of the reason is with the conservative nature of most lawyers in offering advice that will not come back on them.  If a lawyer recommends acting Pro Se and the case goes “bad”, that could come back on the lawyer.  The other reason is probably obvious, and that being the reality that lawyers generally seek to represent clients.  It is expected you will have a better outcome retaining counsel, as lawyers provide expertise in legal matters.  The problem is in the full range of considerations for the client, including the money potentially spent on litigation versus the money that comes out of the litigation.

A reason to retain counsel can be that the case will be “paid” on “contingency fee”.  Particularly in a personal injury case, the Plaintiff bringing the case is seeking money from the other side to compensate for damages caused to the Plaintiff.  In that kind of case, the lawyer will usually be paid a third of the money that he is able to obtain for the client, whether by settlement or by verdict of the court or jury.  In this kind of case, it makes sense to retain counsel, particularly if the case if complex and involves serious questions of liability the lawyer must prove.  In some cases, for example a rear end collision, liability is not reasonably in question.  Then the lawyer helps with determining damages. If the injuries are severe, the damages will be higher.  The lawyer’s job is to seek the highest potential compensation possible, but making all possible insurance claims.

When determining the need for a lawyer in a non-contingency matter, where you must pay the lawyer an hourly fee, financial considerations become more important. If you are in a contract dispute, and someone is suing for a relatively low amount of money, it might not make financial sense to pay a lawyer an amount exceeding what is being claimed in damages (what you owe the other side).  For example, if you are being sued for $1000 and you will have to pay the lawyer $1400 for representation, you will lose money even if the defense is successful.  In most defense cases, insurance companies provide and pay for attorneys to defend cases.  That is where insurance applies.  In those times insurance doesn’t apply it’s important to think about the return on investment.

In bringing certain suits,  particularly disputes involving relatively small amounts, it can be best to act Pro Se.  For example, in contract or property disputes $7500 or less it may be wise o bring a suit Pro Se in Magistrate Court.  The limit to what Magistrate Court can adjudicate is $7500 in South Carolina, and these court cases don’t involve the usual expenses of discovery like in Circuit Court.  If you retain counsel, you will have to pay $2500 as a contingency to bring the matter, and that might be cost prohibitive.  Then the decision comes down to factors like whether or not the other side has an attorney (likely best to get an attorney in that event), or the complexity of the case.  Other actions in Magistrate Court, like evictions, can be done Pro Se, though it all depends on the various factors involved including the complexity of the case.

Consideration:  Even if acting Pro Se, attorneys can still help with things like document production.  For example, for a small flat fee an attorney can draft an Answer to a Complaint to be signed and filed by the Pro Se litigant.  Also, attorneys can be brought in at any point in the litigation.

Bottom line: If money is not an issue, it is almost always best to retain counsel regardless of the type of case.  As money is normally one of the issues to consider, it’s important to consider going Pro Se.